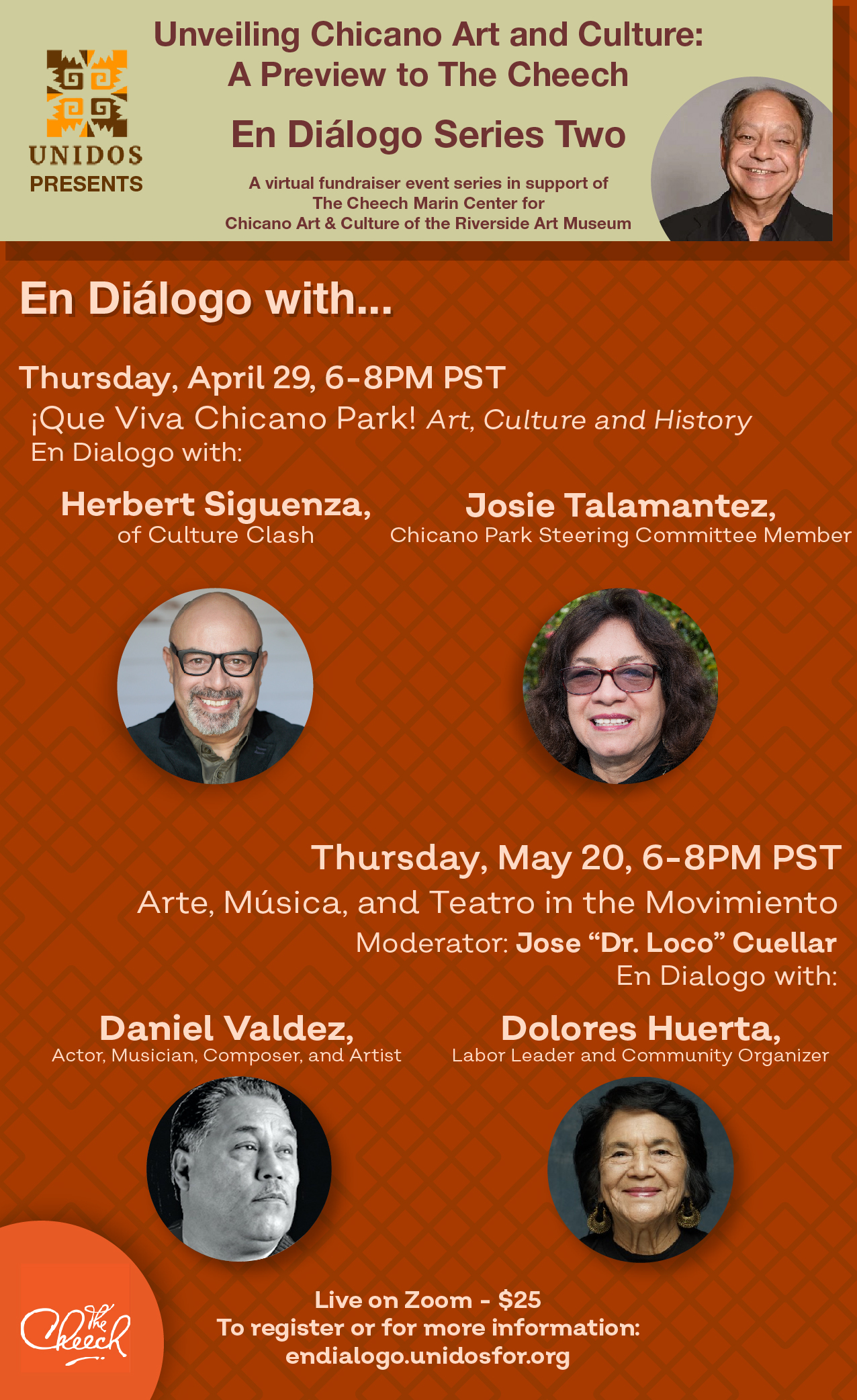 En Dialogo with...
Arte, Musica, and Teatro in the Movimiento

Daniel Valdez, composer, musician, singer and actor, left home at the age of 17 to join his brother Luis, in Delano to fight for the unjust treatment of farmworkers. It was January of 1966, that Daniel left San Jose to join, Cesar Chavez and the United Farmworkers Union. It was on the picket lines that Valdez, learned to do Teatro and incorporate his music to bring the message of the UFW to the workers and the rest of the world. As one of the founding members of El Teatro Campesino, Daniel has been seen in many Teatro productions, including the Chicano film classic, “ZOOT SUIT”, for which he also wrote original music and arranged all of the classic 1940’s Big Band music. In 1987 Daniel realized a thirteen year dream, the life story of Ritchie Valens, “LA BAMBA”, which he produced. Both of these films were written and directed by Luis Valdez. Daniel has also been seen in other roles in feature films such as “WHICH WAY IS UP?” starring Richard Pryor, and “THE CHINA SYNDROME” with Jane Fonda, Jack Lemmon and Michael Douglas. He was also seen in Cheech Marin’s “BORN IN EAST L.A.”, for which he did some featured songs for the Tijuana conjunto. However, Daniel’s first love has always remained music.

1998 marked the 25th anniversary of the recording of the first Chicano album by a major label, A&M Records, “MESTIZO”. It was Valdez’s first solo album and it propelled him into the world of concert performer. He has performed with many musical artists. He was the romantic lead opposite Linda Ronstadt in her stage production of “CANCIONES DE MI PADRE”. He has also worked and performed with other musical artists, such as Carlos Santana, Jerry Gracia, Ruben Blades, Celia Cruz, and Tito Puente, in the critically acclaimed Cinemax special “LATIN SESSIONS”.

In 1996 Valdez composed and wrote the original score for the IMAX film entitled “MEXICO”. A forty minute Imax film tracing three thousand years of Mexico’s history beginning at the height of the Mayan civilization, through the conquest and ending in the present. It enjoyed a successful run at the Imax Theater in Tijuana and at the IMAX Theater in Mexico City’s, Chapultepec Park. It has been named one of the top 15 IMAX films in the world.

In September of 97, Daniel worked with the San Diego Repertory Theater and Southwestern College as a musical consultant and historical expert for the re-staging of the Luis Valdez American Play, “ZOOT SUIT”. This was the first revival of this classic since its creation 20 years before. This began a long collaboration with William Virchis, who directed the play. Also in the June of 2000 he reprised his role as musical director at the Goodman Theater in Chicago for their production of ZOOT. It played to sell out houses and great reviews.

In the spring of 2000, Daniel co-starred in the musical, “SELENA FOREVER”, directed by Virchis, which portrays the slain, young Tejana’s life. It toured through Texas and Daniel gave his final performance in Chicago.

In the summer of 2002, Valdez was again called by William Virchis to come to Chula Vista and mentor and costar in a musical written by two brothers, Charles and Luis Aragon entitled “ELENA”. It is the story of a young Chicana in the 1940’s, who wanted to become a writer. The project was part of a summer musical theater program sponsored by the Visual and Performing Arts program of the Sweetwater Union High School district. Valdez played the role of the father, while sharing his knowledge as an actor with the aspiring young actors.

In January of 2003, Daniel began a 10-week, winter quarter residency, at Stanford University in Palo Alto, CA. He taught Theater in a rare course where students had the opportunity to create work that tells their stories through visual and performing arts.

Mr. Valdez chose to stage “OLLIN”, an original epic poem, based on the Conquest of Mexico. It was a musical performance piece told in an ancient style of mythical story telling. Daniel wrote new music and songs to which he added spoken word, dance and the use of masks. The premiere performance of “OLLIN” was March 10 &11, 2003 at Stanford.

In December of 2004, Daniel premiered “The Westside Oratorio” on a grant from the Continental Harmony group, sponsored by the American Composers Forum. It was a musical piece on Denver Colorado’s Westside, which was a barrio of diverse cultures in the settling of Denver. The families who had lived there for generations were displaced and their history was almost lost with the building of the Auraria Campus. This was Valdez’s most ambitious project to date. The show had 13 original songs performed by a chorus, telling the story of seven generations of Denver history. The show was a great success and was restaged in December 2005 to sold out houses and great critical acclaim. Valdez was given an Ovation Award for the best original musical score, by the Denver Post for his work on the Oratorio.

Valdez and Anthony Garcia, Director, of SU TEATRO in Denver, CO, premiered their collaboration of the musical play entitled EL SOL QUE TU ERES, on October 1st,2005 for a six week run of sold out houses. The play is based on the Greek Orpheus myth. The play is set in Mexico on Dia de Los Muertos, in the present and it incorporates our own Mayan myths. This project began as a joint venture funded by the National Performance Network, with SU TEATRO, GUADALUPE CULTURAL ARTS CENTER in San Antonio, TX, XICANINDIO ARTES, in Phoenix, AZ., and LA PEÑA CULTURAL CENTER, in Berkeley, CA. EL SOL QUE TU ERES premiered at the Denver campus of the University of Colorado in the Eugenia Rawls Courtyard Theater. Daniel was also given a visiting professorship at UCD, teaching classes in theater, music and musical scoring and film for the fall quarter.

While in Denver, Daniel also had the pleasure of writing original music for the critically acclaimed Jose Cruz Gonzales play entitled SEPTEMBER SHOES, directed by Amy Gonzales at the Denver Center for the Performing Arts.

In December of 2006 Daniel was awarded an Honorary Doctorate Degree in Humane letters by the University of Colorado at Denver for his many years of experience in the fields of music, theater, and film.

Along with Mr. Valdez’s list of stage, film and musical credits, he has always worked with community organizations and schools as a positive role model for Hispanic youth, with special guest lectures, performances, workshops and benefits for these organizations.