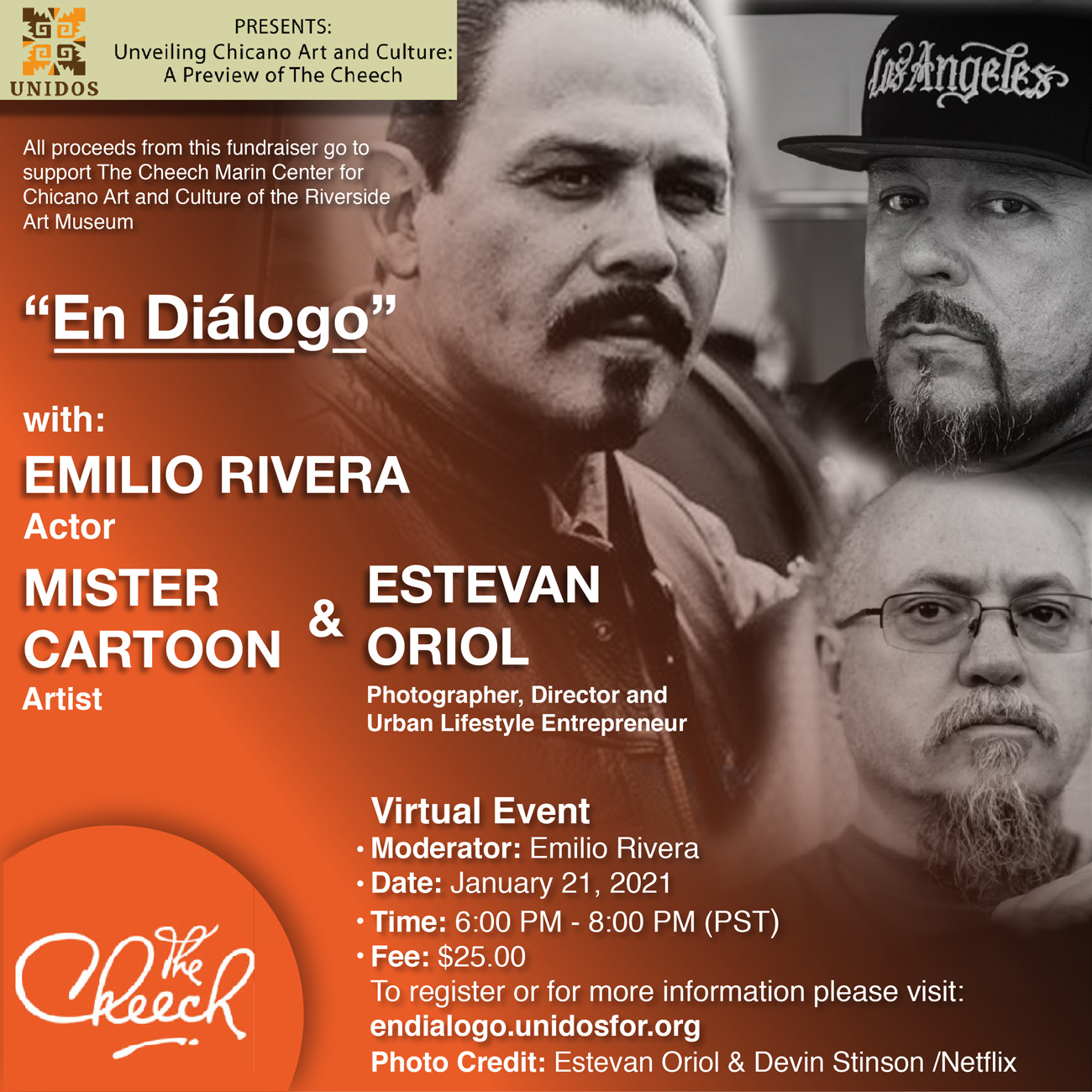 We are pleased to announce Emilio Riviera (Moderator), Mister Cartoon & Estevan Oriol in conversation for our next En Diálogo Zoom on Thursday, January 21, 2021, 6 p.m.–8 p.m. Tickets are $25. 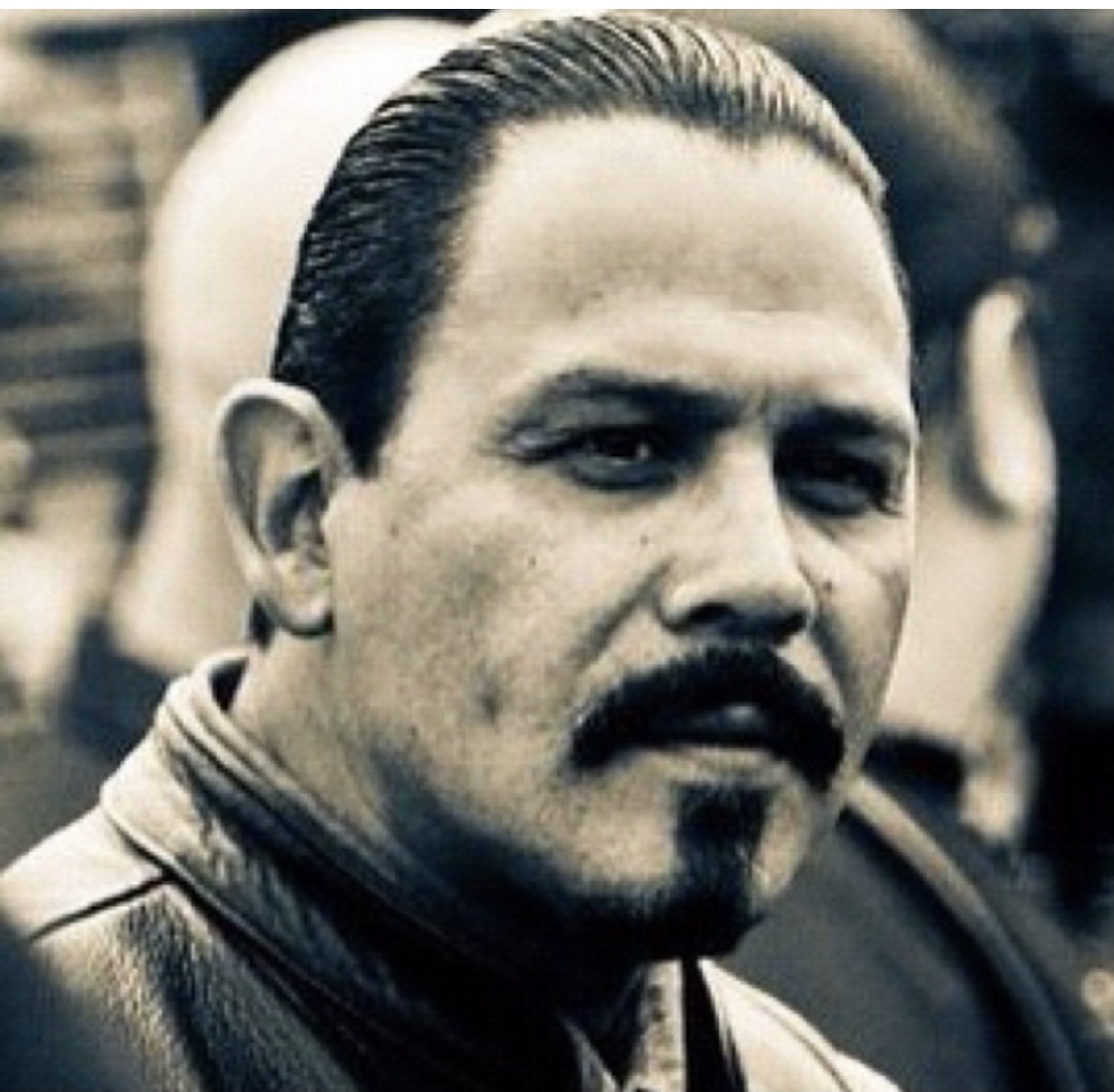 Emilio Rivera is a prime example of how turning one’s life around can make dreams a reality. Growing up in a rough and impoverished neighborhood, Rivera turned to wild and reckless behavior during his teen and young adult years. However, he found discipline and true passion through the art of acting. After years of hard work and perseverance, he has become a well-known name in the industry, and his resume continues to grow.

A few of Emilio’s most notable films include Steven Soderbergh’s award-winning film Traffic and David Ayer’s Street Kings with Keanu Reeves, Forest Whitaker and Hugh Laurie. Rivera also played Paco the Hitman in Michael Mann’s Collateral, starring opposite Jamie Foxx and Tom Cruise. He can be seen in F. Gary Gray’s A Man Apart, starring opposite Vin Diesel, High Crimes opposite Ashley Judd and Morgan Freeman, and Nick Lyon’s Bullet opposite Danny Trejo. More recently, he could be seen in the blockbuster film Venom and in 3 From Hell, which was released into theaters in September 2019.

Rivera is perhaps best known for playing the starring role of Marcus Alvarez on FX’s Sons of Anarchy, as well as being a series regular on its spin-off, Mayans M.C., which was just picked up for its third season. He has also recurred heavily on the FOX series Gang Related and on Showtime’s Weeds. Emilio also recently wrapped his recurring role on the new hit Netflix series On My Block for a second season.

Rivera’s hard work and dedication to his career has allowed him to juggle recurring roles on both Amazon’s Hand of God and the SyFy channel’s zombie apocalypse series, Z Nation, where he plays Hector “Escorpion” Alvarez. He recurred on the second season of Bounce TV’s Saints & Sinners and in the films 48 Hours to Live with James Maslow and Tommy Flanagan, Badsville opposite Robert Knepper, and Loca with Danay Garcia. In addition, Emilio has begun developing one of his own feature film projects.

Rivera’s decision to learn from his past and pursue his passion has led to continued success and a promise of more to come in the future. 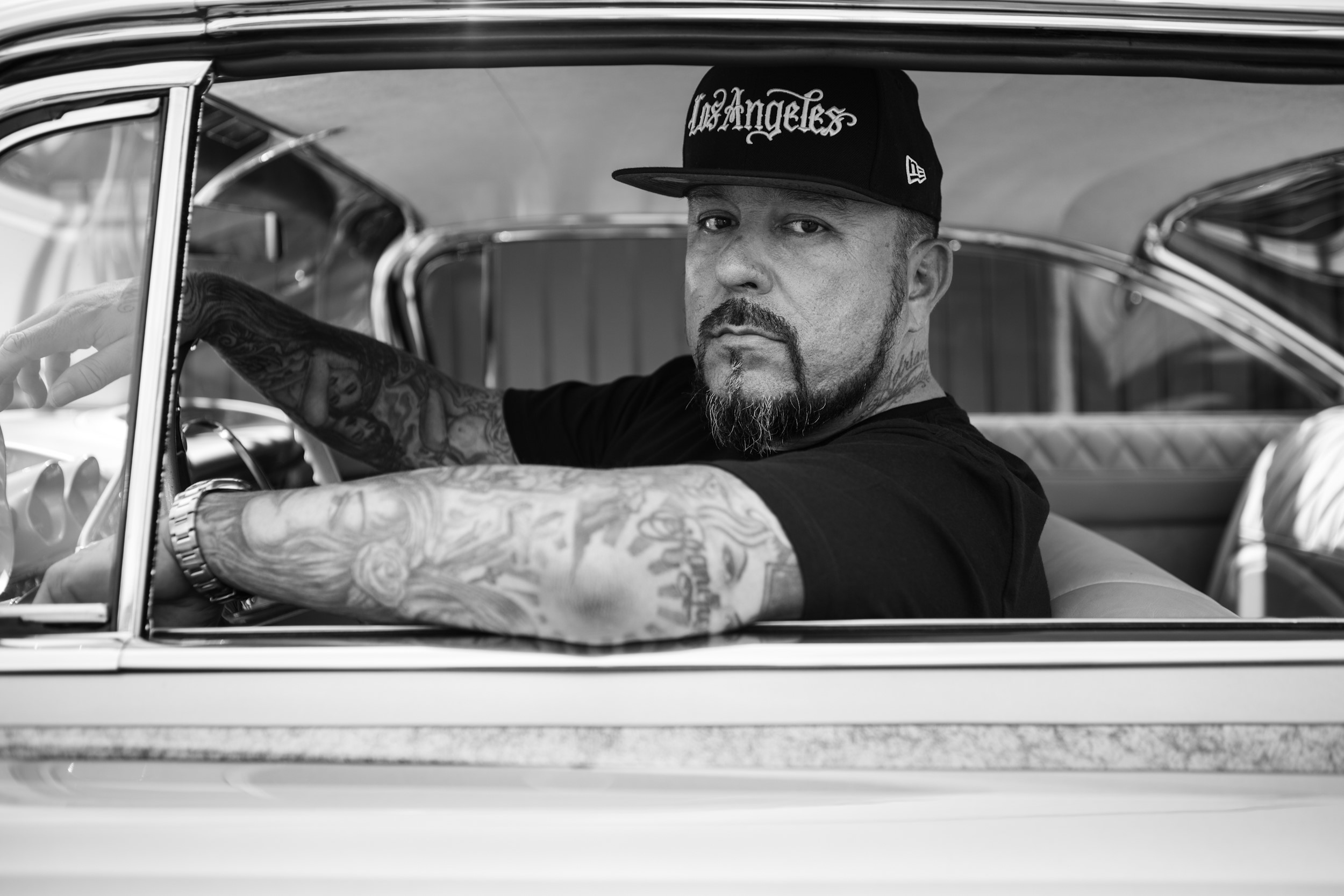 Mister Cartoon’s expressive style of art is universally recognized and embodies the true soul of Los Angeles street culture. Beginning his career as a graffiti artist in the 1980’s, he gained notoriety for his album cover designs, logos, advertisements, custom lowrider car murals and his one of a kind tattoos.

Mister Cartoon’s richly detailed, hand-rendered designs are inspired by the style of tattoos that originated in the streets of 1970s’ Los Angeles – fine line Chicano black and grey custom tattoo art. Mister Cartoon took this style of tattooing and brought it into mainstream culture, he is known as a pioneer in the tattoo world as one of the first artists to get global notoriety by tattooing celebrities, athletes, musicians, and actors alike.

The bonds formed with clients in the tattoo chair have led to some longstanding relationships and unique collaborations. Cartoon’s private tattoo studio, Skid Row Tattoo itself has become a cultural landmark all in itself. From Thailand to New York, Japan and the United Kingdom, Cartoon’s tattoo residencies continue to take his cultural message worldwide.

He has been featured in numerous publications, including The New York Times, The Wall St Journal, Rolling Stone, Complex, XXL, GQ and many more.

His work has been a integral part of music culture, producing album art work Logos and identities for the likes of Shady Records, Eazy-E, Paul Wall, Clipse, Cypress Hill, Wale, Zac Brown Band and many more.

Cartoons custom muralled car collection and art work has been featured internationally from art shows in London and Japan to the Los Angeles Museum of Contemporary Art. His style and art transcends many artistic mediums.

Mister Cartoon is continually driven to give back to the community that has supported him. He is able to do this through you outreach programs and collaborations with organizations that are active in the community. 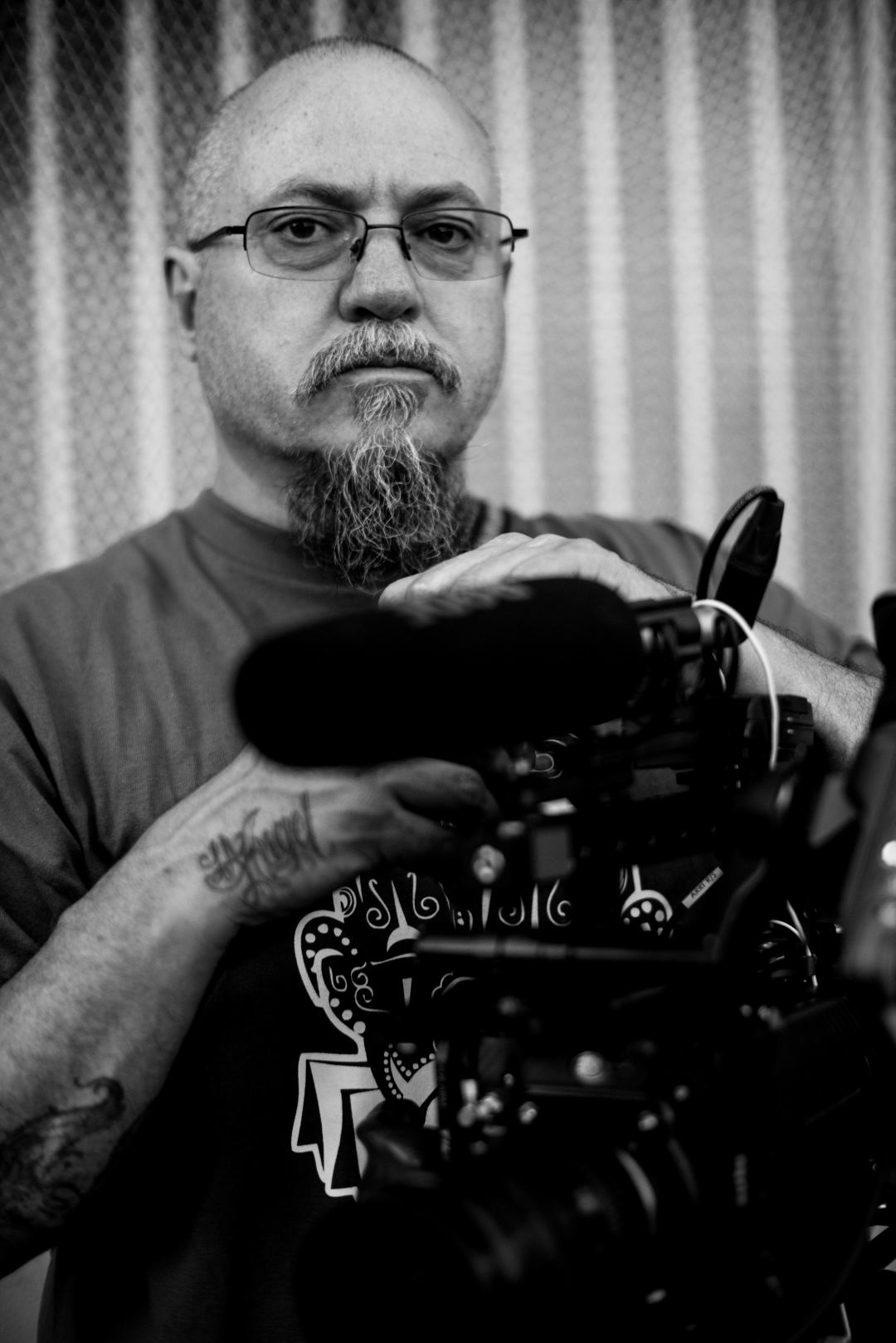 Estevan Oriol is an internationally celebrated professional photographer, director and urban lifestyle entrepreneur. Beginning his career as a hip-hop club bouncer turned tour manager for popular Los Angeles-based rap groups Cypress Hill and House of Pain, Estevan’s passion for photography developed while traveling the world. With an influential nudge and old camera from his father, renowned photographer Eriberto Oriol, Estevan began documenting life on the road and established a name for himself amid the emerging hip-hop scene.

In addition to shooting campaigns for companies including Cadillac, Nike and Rockford Fosgate and directing new media projects for My Cadillac Stories, MetroPCS, MTV and Apple, Estevan has designed album covers and/or directed music videos for artists including Eminem, Cypress Hill, Blink 182, Snoop Dogg and Xzibit.

His work has been showcased in select galleries and institutions—such as Smithsonian Center for Latino Initiatives, Mesa Contemporary Art Center, Petersen Automotive Museum, and The Museum of Contemporary Art, Los Angeles’ Art in the Streets exhibit—concluding with a best-selling books of his work: LA Woman, L.A. Portraits, And This Is Los Angeles capturing the dangerous gangsters, Lowriders, Musicians, Celebrities, L.A. Lifestyle and alluring beauty of women shot in his uniquely provocative and raw style. His photography has been featured in Complex, FHM, Juxtapoz, GQ, Vibe, Rolling Stone and other publications, with appearances on popular television shows such as, CNN’s AnthonyBourdain-UnKnown Parts, CNN’s Street Food-Roy Choi, HBO’s Entourage and Last Call With Carson Daly.